The government's all up in a fuss about guns and ammo too.
Makes me wonder, what will become of the ol' red white and blue.
Thinkin' this through I wonder what would John Wayne have done
if in all the bar fights and street show downs, he didn't have a gun.
Would he have used a bow and arrow or gathered rocks to throw?
Would wrestlin' be the ultimate way to settle any big blow?
But wait, that wouldn't work too well men in those days ate lots of steak,
so when it came time for their wrestlin' match I'm afraid they wouldn't make weight.
Maybe sumo wrestlin' could work because potatoes were a popular food source.
I guess that wasn't introduced yet no Suzukis or Satos had yet migrated the  U.S. course.
If only they had facebook back then so the Duke could post blackmail on his enemy,
like pictures of bad horse tradin' deals or times they were surrounded with people of infamy.
If only more media was around back then, John Wayne could just host a press conference.
MSNBC would skew things in favor of the criminals and FOX would call them dense.
He could probably call a lawyer, I think those were around back then.
But how would the judge's ruling be enforced if there were no guns for the lawmen?
Poor John Wayne, that'd be though. He was just tryin' to save lives and keep bad guys in jail.
But every time he didn't have a gun, surely he wouldn't have been able to prevail.
With fightin' gettin' more and more complicated, what I would've recommended be done,
is find someone smart with a creative mind and have them invent a gun! 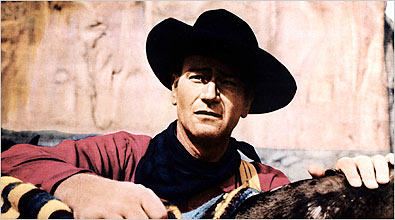