If Politicians were Cowboys


If Politicians were cowboys lots of our problems would be solved.
The now usual lyin’ and cheatin’ wouldn’t last long at all.
The minute that someone let a falsity slip from his lip,
An old codger, like John Wayne, would reach for the pistol at his hip.
Foreign policy would be no debate topic at all.
Cowboys stand up for their country and their not afraid to sacrifice and fall.
Cowboys have a reputation of being the first ones there and the last ones to leave.
When a job needs done, they lead by example and will be the first to roll up their sleeves.
Cowboys make their actions many and their words very few.
A cowboy says more with deeds than any politician our country knew.
This “war on women” the left cries about would be no complication.
When a cowboy sees a woman he stands and takes his hat off in her adoration.
To keep politicians happy, they need pensions and money and a fancy place to dine.
But, like the classic song says, cowboys are satisfied with “old dogs and children and watermelon wine.”
We’d save the forest because we wouldn’t need as many paper documents.
With cowboys a handshake means more than any made-to-break settlement.
The EPA and PETA, Solyndra have you in a fuss?
Cowboys were the first environmentalists; they’re tied to the land so they know what’s good for us.
There’s not one cowboy out there who won’t clean up his plate.
You don’t need to tell him there’s starving kids out there, he just likes his steak.
Politicians need umbrellas and are fare weather folk indeed.
Cowboys know the work still needs done, even when it’s negative forty degrees.
The last, but most important, thing that cowboys make a point in gettin’ done,
Is dressin’ up on Sundays to worship, God the father, spirit and son.
See, it’s not because they’re perfect or don’t stumble very often,
If a cowboy heard that, he’d laugh and know you weren’t talkin’ about him.
Even though they mess up and don’t always do things just right,
A cowboy’s got his morals lined up and a politician, well he’s still confused and deep down, full of fright.
They’re not afraid to run on their record, they stand behind the things they do.
So if we want our country to prosper let’s get some cowboys to represent the red, white and blue. 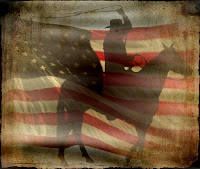